I haven’t blogged properly for a while, partly because I’m wrapped up in The Mighty Healer, and partly because the boyfriend and I have both been varying shades of ill, ill, ill, for several months. Nothing sucks up time like hospital visits and bedrest.

Here in the UK, the general election is about to topple onto our heads. That means blanket coverage of men in bad suits shouting at each other about the NHS, not because they care that it’s circling the drain, but because winning debates is more fun than losing them. After a while, all the chatter ceases to sound like real life and enters Pink Floyd video territory, particularly when Cameron gets a bit sweaty and you sit there hoping his rubber mask will slither off to reveal the circuitry within.

Karolyn Gehrig is a queer disabled artist from Los Angeles. Like me, she has a connective tissue disorder and spends a lot of time traipsing in and out of hospital. To pick herself up, Karolyn started taking selfies in a medical setting, tagging them #HospitalGlam. “I started posting #hospitalglam because it was frustrating to me that every time I got sicker I’d disappear from my commitments and then feel shy about explaining where I’d been when I knew there was absolutely nothing wrong with pursuing treatment for my disabling chronic illnesses.”

The idea struck a chord. With the success of the #HospitalGlam hashtag on Twitter, Karolyn set up a Tumblr for fellow patients to submit their own selfies, giving them something to do in those doldrum waiting rooms, and winning back a bit of self-esteem at the same time. Any gender, any illness, artistic or silly, made-up or fed up. 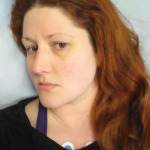 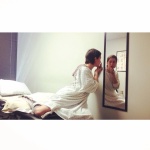 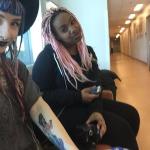 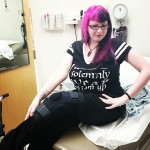 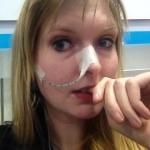 Me, modelling the Alien face hugger 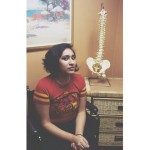 One nice effect of #HospitalGlam is finding like-minded souls. Here’s Heather of Mortuary Report. She’s a funeral director and all-round fascinating human. You should read her blog on reclaiming sexiness and personal empowerment whilst chronically ill, but here’s a chunk that stuck out for me:

“There are few places where one feels less empowered and beautiful than in a medical setting, and it’s not just because of that awful beige color the walls in doctor’s offices are always painted. Most humans are fortunate to only associate doctors with tedious time spent in waiting rooms and an annual check up. For those of us who are chronically ill, however, the experience of spending as much time as we do in medical settings becomes a spin-cycle of misery, depression, and – often – questioning our own sanity. […] Being disabled in an able-bodied society quickly became a source of shame and frustration.”

Model Melanie Gaydos will be familiar from Rammstein and Die Antwoord videos. Here, she talks about growing up with Ectodermal Dysplasia and bringing her individuality to the modelling world.

“When I go on a photo shoot, if there’s other industry models there, they normally don’t really know what to make of me. And they’re usually like, ‘What the fuck is this?’ […] I love modelling. A time for me to be completely open. I guess it’s kind of like a therapeutic process for me.”

#HospitalGlam is a weapon for those of us with chronic illnesses. With it, we reassert our individuality, regain our playfulness, and have a ‘frivolous’ place to escape to when all else might seem out of control. It is therapeutic. And it’s fun. And all the while people ask what the fuck, we know it’s needed. Our Lady of the Cathode Rays. Thine be the free hospital mochas.

See you on the hashtag.